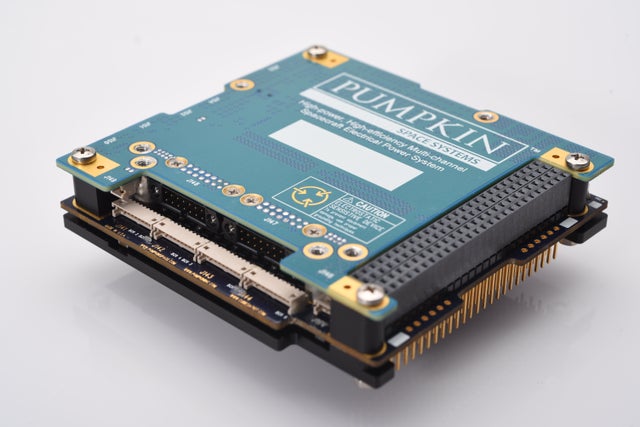 The EPSM 1 serves as the nexus of a complete, high-performance and highly efficient FPGA-driven, GaNFET-based multichannel power system for small satellites. Its advanced functionality takes the guesswork out of managing high and varying power levels in small satellites.

The six SAIs blocks collect power for the outputs and for battery charging as required. Each SAI block independently implements a kHz-speed perturb-and-observe MPPT algorithm, with programmable maximum current setpoints and with automatic power equalization across all six SAIs. The SAIs blocks can handle up to 480W total solar input power.

Each independent battery block provides reserve power (up to 112W per battery) when the output loads exceed the total SAI input power. The EPSM 1 charges each connected 16.8V Li-Ion battery in CC/CV modes at up to 6A, with automatic CHG/DSG switchover. The recommended battery is Pumpkin's BM 2 4S2P battery module (not included), and the EPSM 1 is compatible with the BM 2's battery balancing, heaters, and all telecommands and telemetry.

Each output block provides a regulated output voltage at up to 5A (3V3 & 5V0) and 8A (12V & 28V), for a total of ~300W. Each output block has a programmable current limit, and the 28V block is switchable and can operate at lower voltages.

A Pumpkin SupMCU™ handles telecommands and telemetry via SCPI over I2C, and implements a variety of sophisticated additional features including a programmable WDT, programmable overtemperature limits OT1 & OT2, smart RBF and separation inhibits, automatic recovery from power deficit conditions and automatic recovery from solar panel shading. All telemetry is timestamped and fully formatted in engineering units; there is no need to apply calibration constants or conversion factors to EPSM 1 telemetry.

The EPSM 1 is provided with an integrated heat spreader and a built-in overvoltage clamp, and operates within substantially derated operating conditions. Three internal and eight external temperature sensors ports are also provided. The FPGA is SEU immune, and multiple EPSM 1s can be paralleled together. Per-block efficiency is typically > 99% at moderate-to-high currents.

Add to Cart
<
>
Includes:
Does not include:
Compatible with:
WARNING: The voltages and currents present on the S0-S5 and VBATT terminals of the H2 connector may result in damage or destruction of the EPSM 1 or of other connected modules if connected to systems that expect other voltages and/or currents at these terminals. Review the EPSM 1 datasheet and confer with Pumpkin before use.