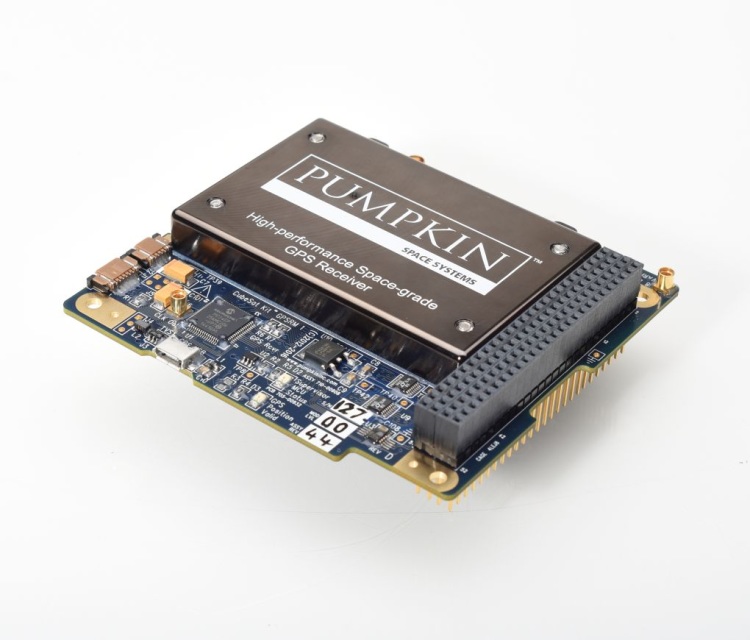 Full access to the entire NovAtel OEM7 API is provided via a selectable 3.3V LVTTL serial interface, along with PPS and VARF outputs. The GNSS receiver utilized in the GPSRM 1 is NovAtel's OEM719-GSN-LNN-TBN-H, with the following features / configuration:

The GPSRM 1's Vinti7 OP offers a self-contained means of estimating position and velocity. Using a past valid fix from the OEM719, it can compute a new solution in roughly 200ms, and at less than 20% of the power required to operate the OEM719. Position and velocity can be propagated forwards and backwards in time. The GPSRM1's SGP4 OP requires TLEs from the ground.

SupMCU provides telecommands and telemetry via SCPI over I2C, as well as both OPs. The OEM719's microUSB port is available at all times; it is primarily used in conjunction with NovAtel Connect software in a development environment and to update OEM719 firmware .

The OEM719 line of software-defined GNSS receivers is compatible with multiple constellations (e.g., GPS, GLONASS, Galileo, Baidu, etc.) and frequencies (e.g., L1, L1 + L2, etc.). The base configuration as included with the GPSRM 1 is GPS L1 (only). The most commonly requested configurations are listed below; for other constellations and/or frequencies, please contact Pumpkin. Customers can also re-flash the OEM719 firmware after purchasing the GPSRM 1, using additional-cost firmware upgrades from NovAtel and the GPSRM 1's microUSB connector.

This is an export-controlled GNSS receiver (ECCN 7A105). COCOM altitude and velocity limits have been removed, enabling the GNSS receiver to function at any altitude and velocity. Purchasers outside of the USA will need to provide additional information to complete the sale. Pumpkin is registered with the DDTC, and includes the necessary paperwork at no additional charge.

Add to Cart
<
>
Includes: The GPSRM 1 does not include a GPS antenna; a right-angle MCX connector on the antenna cable is required.
​
A variety of factory configuration options are available -- please consult the datasheet, and the GPSRM 1 ordering form, for more information.
This module is compatible with all CubeSats that conform to the CubeSat Kit Bus standard with its 104-pin connector. +5V (+5V_SYS) and +3.3Vdc (VCC_SYS) are required to power the GPSRM 1.
Sale of this product is unrestricted to US persons. Users outside of the USA can purchase this item, subject to United States Export laws. Most customers will have no problems satisfying these requirements.